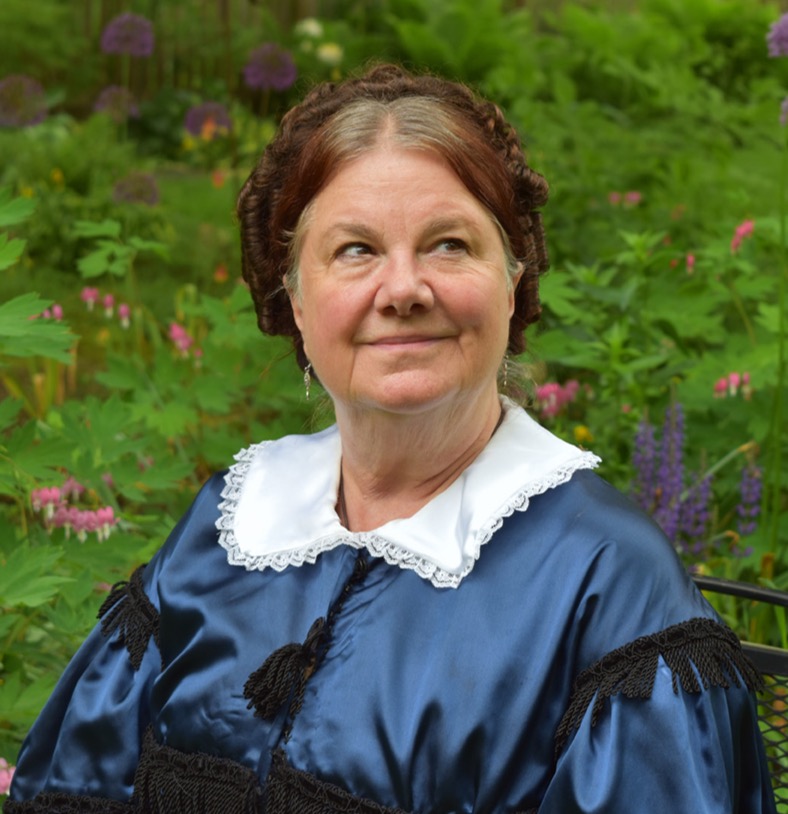 The second lecture, by noted historian and Civil War expert Bruce Allardice, provided an overview of how Hollywood has presented the Civil War in film – which films are historically accurate or inaccurate, which films are generally considered to be great or duds, and some of the behind the scenes details related to specific films.

Dressed in a period costume, Ms. Lynn told of Ms. Stowe’s early life as the sixth child of eleven children, her mother’s death when Harriet was only five years old, and the classical education she received as a student in the Hartford Female Seminary. In 1832, Harriet moved to Cincinnati to accompany her father who was to become the president of Lane Theological Seminary. She joined literary and political clubs and became active in the abolitionist movement, a cause that remained a lifelong passion.

It was at a literary club meeting that she was introduced to a widower and professor, Rev. Calvin Ellis Stowe, also an ardent abolitionist. They married in 1836 and had seven children together. The couple was active in the Underground Railroad and frequently sheltered slaves making the journey to Canada. Sadly, their young son, Samuel Charles Stowe, only 18-months old, died from a cholera epidemic raging through Cincinnati.

By 1850, Rev. Stowe had been offered a position teaching at Bowdoin College in Maine. That year, while at church, Harriet had a vision of a dying slave, and took that as a sign from God to write her book. She set to work, and in June 1851 the first installment of her book was published in the anti-slavery publication The National Era. It was an immediate sensation. The serial version continued through April 1852, and in March of 1852 it was printed as a hard-bound book. In less than one year, more than 300,000 copies of "Uncle Tom’s Cabin" had been sold.

Harriet always said the book was written by God and that she was only the vessel transcribing the words. In writing the book, her intent was to show the horrors of slavery to Northerners — how families are destroyed and ripped apart, the sexual crimes committed against many of the women, and the inhumane living conditions slaves endured. She hoped that Southerners who would read the book would feel empathetic toward the slaves and feel remorse and regret for what was done to them by owning, trading, and using them. Sadly, the majority of the Southerners continued to justify their need to own slaves.

Harriet wrote many other books, articles, and short stories, but none of them achieved the success of "Uncle Tom’s Cabin." It went on to become popular in England and eventually was translated into more than 70 foreign languages. In the 19th century, it was the second-best selling book in the United States, surpassed only by the Bible.

The second presentation featured Bruce Allardice, a history professor, especially knowledgeable about anything related to the Civil War. He outlined how he would cover his topic: by reviewing the history of Civil War films; discussing the major themes, focusing mostly, but not exclusively, on "Gone With the Wind", "Shenandoah", and "Glory"; and describing the historical accuracy of Civil War films.

The Civil War, this  nation’s greatest conflict, pitted citizens against each other. Films about the war have attracted our best actors, actresses, directors, and songwriters. It has also attracted some real duds. Said Mr. Allardice, “If you take nothing else away from this talk, never see the worst movie about the Civil War, "Journey to Shiloh", made in 1968.”

He considers "Gone With the Wind" to be the best movie ever made. Based on the successful novel of the same name, written by Margaret Mitchell, it premiered in 1939 in Atlanta. The two main stars in the movie, Vivien Leigh and Clarke Gable, play characters who are not very likeable and who have very little passion for the Confederate cause. For Scarlett O’Hara, the war is and inconvenience, interrupting her love life and the parties she attends. Rhett Butler is a war profiteer who isn’t interested in the reasons of the conflict as long as he can make money.

At the time, movies about the Civil War generally lost money at the box office, so this production was a huge gamble. The bet was rewarded handsomely. Since its release, it has made over $198 million dollars. Adjusted for inflation, it has grossed over $1.5 billion dollars. It launched Vivien Leigh’s career. It won eight Academy Awards and was nominated in 13 categories. It changed movie-making forever.

"Shenandoah," an anti-war movie made in 1964, stars Jimmy Stewart as a landowner and farmer who tries unsuccessfully to keep his family out of the war. In a famous scene, as he is about to bury his son and daughter-in-law, his character says, “There is nothing much I can tell you about this war, I suppose. The undertakers are winning it. The politicians will talk about the glory of it. The old men will talk about the need for it. The soldiers, they just want to go home.”

"Glory" was made in 1989. It is as much an anti-war movie as a civil rights movie. It is based on the true story of Robert Gould Shaw, who was assigned to train and lead the first all-Black regiment in the Civil War, the 54th Massachusetts.

Civil War movies tend to vary in historical accuracy. Financial success and entertainment always came before getting the details correct. The older movies tend to be less accurate than more recent ones. Mr. Allardice described a litany of mistakes in a long list of movies, such as American flags with the wrong number of stars or noticing an ear-piercing hole in one of the ears of Daniel Day Lewis in the movie "Lincoln."

For an encore presentation of these lectures, visit the Levy Senior Center Foundation’s YouTube channel.

By Wendi Kromash as published in the Evanston RoundTable

Author Discusses Mother's Journey on Anniversary of Emmett Till Lynching

‘We’ll Always Have Paris’ … Just Not This Year